Three decades on, 1983 Mister Motocross winner, Ray Vandenberg, has a surprise birthday present in the shape of his title-winning RM500. There’s a bit more to it than that, though.
This article originally appeared in Transmoto Dirt Bike Magazine‘s 2014 January (#39) Issue…

We can all remember a special bike from our past. Maybe it’s the first one you ever rode, the first one you ever crashed, or the first one you said you’d never let go of. But what if you’d won the Mr Motocross series on the tricked-up thing, and then lost track of its whereabouts just a week later? What if, three decades down the track, your friends – your true friends – embarked on a journey to put this race bike back in your hands? Sounds like a Hollywood script, doesn’t it? Well, this real-life feelgood story gets played out much closer to home. The star of this show is a 1983 Suzuki RM500; the bike that Ray “Goof” Vandenberg won the 1983 Mister Motocross series aboard, back when the sport was at its peak in Australia.

Having won the 1982 125cc Australian MX Championship, Goof had shown he had talent. But up against the hard men of motocross on a 500cc, 60-horsepower two-stroke, no one gave the skinny Victorian teenager a chance in the 1983 Mr MX series. In front of 10,000 spectators at the fifth and final round of the series at his home track of Broadford, however, this premier-class rookie wasn’t about to pay attention to the form guide. Not with double points on offer. And when four-time Mr MX Stephen Gall crashed in the third moto, Vandenberg was suddenly within striking distance. Needing only to finish ninth in the final moto to win the title, 19-year-old Ray Vandenberg crossed the finish line in third place. In doing so, he clinched the series win and became the youngest ever Mister Motocross winner.

Just a week after that memorable day at Broadford, while riding the Aussie titles in South Oz, Goof picked up the first of a series of knee injuries that would cut his racing career cruelly short. That day in SA also marked the last time he would ride, or even lay eyes on, his beloved RM500. When he got out of hospital, he discovered that Trevor Flood – a multiple Aussie champ, the first ever Mr Motocross winner and Goof’s Suzuki team manager – had sold the bike. Goof limped away from the sport and settled down to normality as a panel beater, while his Suzuki was raped and pillaged on the seedy second-hand motorcycle market.

Thanks to the efforts of several of Goof’s good mates, the champion and his steed have finally been reunited, 30 years on from that historical day at Broadford. But this was no straightforward rebuild. Detective work, mixed with the sort of ingenuity only achieved when passion overtakes practically, ensure that this RM500 is as close as humanly possible to the race bike that gave Goof his moment, albeit fleetingly, at the summit of Aussie motocross. Fittingly, we returned to Broadford to photograph the resurrected machine for this feature – just a week before Goof got the surprise of his life at his 50th birthday party. 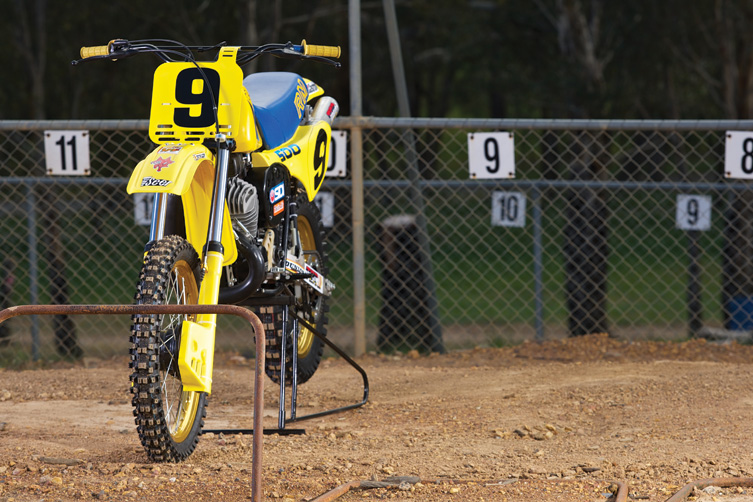 In the three decades that Goof had been parted with his title-winning bike, the Suzuki had fallen on tough times. Arno Franz, who owned the machine for 20 years, had replaced the race engine with a more sedate 400cc unit out of a PE, Suzuki’s then enduro model. Antique restoration expert and VMX fan, Jason Ladson, then bought the RM after seeing it on OzVMX’s website. Goof actually had the chance to buy the bike and was encouraged to do so. But at that point, she bore little resemblance to his mighty Samurai warrior, and he let it slide. Ladson then set about restoring the RM to its former ferocity by sourcing a proper 492cc engine and hunting down hard-to-find items, such as the missing plastics and NOS (New Old Stock) parts. It was nearly two years into this rebuild when Ladson was approached by Goof’s long-time friend and motocross tragic, Rosco Holden, who laid out his elaborate plans to present Goof with a fully restored race bike on his 50th birthday this year; an occasion that would also mark 30 years since Goof’s historic Mister Motocross win. It almost seemed like destiny had dictated the reunification of man and machine. The rebuild would have been much easier if Goof hadn’t been such an original ‘Bling King’. The plastics are a fine example of that. Goof started the year racing with the standard Suzuki plastics, but by the culmination of the Mr MX series, the bike was sporting TMV fenders and side panels. These Dutch-made replacement parts (used because they were stocked by Trevor Flood’s Suzuki dealership) were impossible to find in 2013, as the original factory burnt down in 2001. And when five-time World MX Champion and Suzuki expert, Belgian Eric Geboers, told Rosco Holden he hadn’t seen those plastics in Europe for 25 years, there was no option but to make their own panels. In comes another ‘MX brother’ in the shape of Rob Urquhart and, 70 man-hours later, they had MDF and car-bog moulds to vacuum-form the new panels off. Once hydroblasted, they had the look, colour and, more importantly, the texture of the originals. 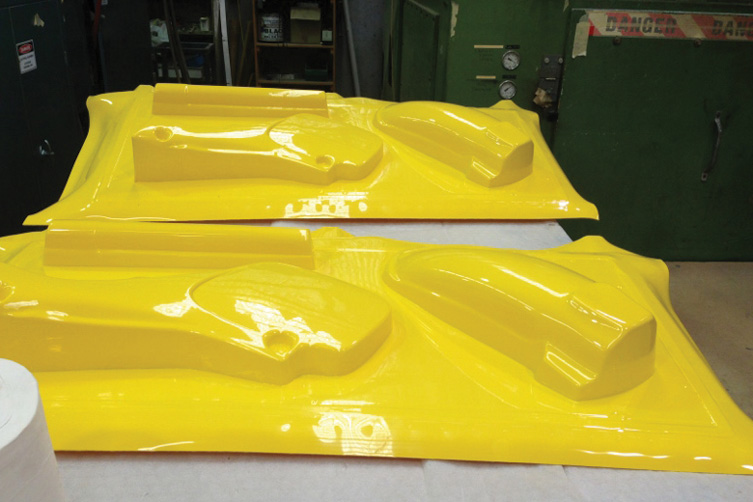 The original wheels were stripped and the rims anodised gold, just like Goof did with the standard silver alloy hoops back in the day. NOS Suzuki spokes were laced onto the original hubs. The brakes’ backing plates were sent away to get sand-blasted, again to replicate the ‘bling’ that Goof added to the bike for that season. NOS brake shoes complete and complement the look. The generic tank graphics are NOS, but many of the smaller stickers had to be made from scratch. Luckily, many original Michael Bazeley photographs from the 1983 series final have been found, making size, colours and placing details much easier and closer to the originals. The Castrol decals appeared on all the 1983 race bikes as the oil giant was the Mr Motocross series’ major sponsor, and paid the winning rider a $4000 bonus. Goof even had to sticker over the Bel-Ray patches on his jersey to keep the promoters happy. The bike runs the standard White Power/TMV expansion chamber, though it was originally finished in bare metal. Repairs and dings over the years mean that it’s been painted black to give it a more uniform appearance. The alloy muffler has had a similar life as its mounting bracket had signs of welding before being polished out. It’s a Beets item, in keeping with the Dutch TMV pipe. 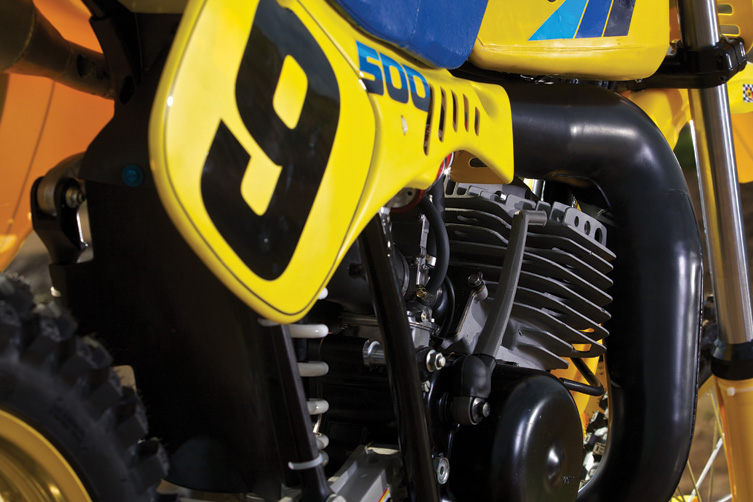 As a distributor of both Simons forks and White Power shocks, Trevor Flood ensured the bike became a product placement workhorse. The original components had been lost/sold/stolen over the years, so “Team Goof’s 50th“ had to source identical items. This shows the level of detail they’ve gone to – hunting down correct
fork internals for a bike that might never turn a wheel in anger again. Goof was remembered for being pretty handy with a drill, and a trademark of his 1983 title-winner was the Swiss cheese-like appearance of many of its components. Basically, if there was a metal part on the bike that could be drilled or milled to save weight, it was. After much detective work (including many false starts that had Rosco and Les Barfoot following lead after dead lead), they finally managed to locate Goof’s original barrel and head. The barrel (which needed a new sleeve and NOS piston) and the head (which still featured the meticulous drilling, milling and finish that they did back in 1983) were mated to a standard bottom-end, as the original was never to be found. Rumours range from it being used in an off-road buggy at some time, destroyed by fire, or sitting next to a gun-toting Elvis on that grassy knoll. A replacement Mikuni flatslide carburetor and Twin Air air filter were then sourced to complete the job. The rebuilt engine has never been run. The restoration posse decided that delicate decision was best left to Goof. BIRTH OF AN IDEA…

“Along with Kristian Perry (who’s like an adopted son to Goof), Rosco Holden (pictured) got the idea for this bike rebuild at the MX Nats event at Horsham in July, 2012. He had heard about the RM500 resurfacing and wanted to pull the project together in time for Goof’s 50th. Speaking to Holden, it’s clear that passion has driven the mission from the start. “There have been so many mini-stories behind this build,” says the former racer and team manager. “Trying to track down a 30-year-old engine has more lows than highs, but when all the pieces start to fall into place, the hours of phone calls and false hopes subside and elation takes over. As a member of Jeff Leisk’s Honda team back in 1983, I wasn’t supposed to cheer for the opposition. But Goof was sublime that day at Broadford – smooth and flowing – and he brought a new, more modern style to the sport. It’s a testament to the Mister Motocross series that people still talk about that era today.” “After the speeches at my 50th, Rosco Holden got up and said something like, ‘There’s one more mate to come’. So I was thinking that Jeff Leisk – who was in Europe and called to tell me he couldn’t make it – was going to rock up. Then I saw this yellow thing being wheeled through the doorway. I was just like … ‘F#@k!!!’ I honestly had no idea about it. How everyone kept it a secret for so long, I’ll never know. The groundwork, the time and the effort so many people put into this project was just ridiculous. It was really overwhelming and, I’ll tell you, there were a few of us tearing up that night. The boys hadn’t been game to even start the thing. So the day after my 50th, we fuelled it up and kicked it over in the back yard. Fricken gold, it was. Then we drained the tank and put it in the dining room, where it’ll live. Aside from few small parts, it is actually my 1983 race bike. It was a trick-looking
thing in 1983 and I reckon it still looks factory these days. It’s just … perfect.” 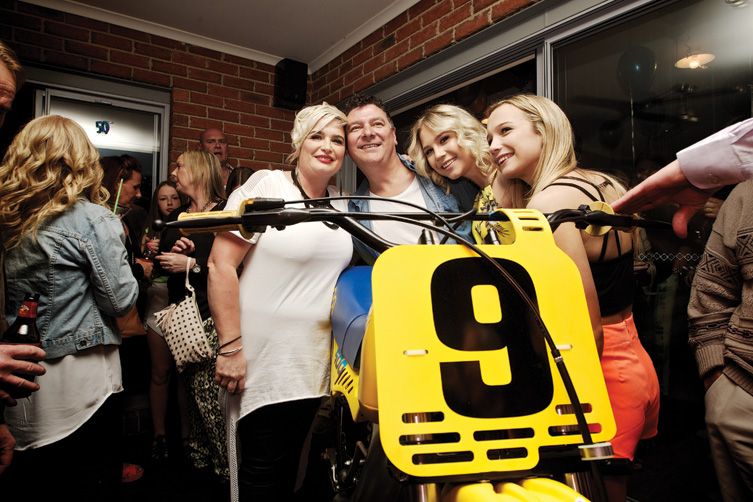 ^ Ray Vandenberg (second from left) with the nucleus of the restoration posse at the bike’s handover. From left: Gary Hacking, Rob Urquhart, Les Barfoot, Rosco Holden and Kristian Perry.