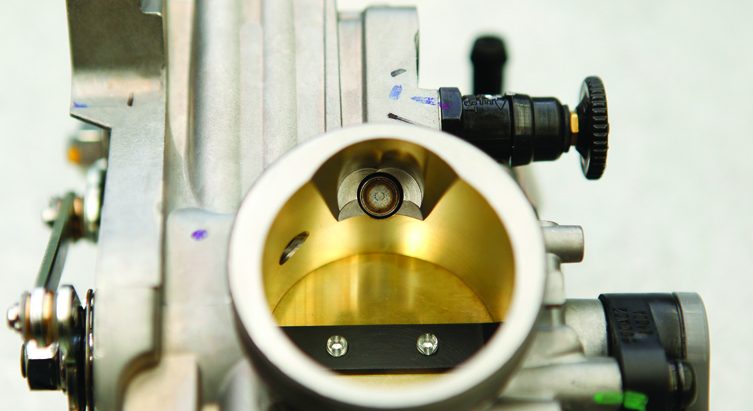 Fuel injection first appeared on a production dirt bike way back in 2002, and a greater majority of late-model four-stroke motocross and enduro/trail bikes now uses the technology. Nonetheless, there remains a lot of scepticism about the reliability of EFI systems and the durability of their componentry – much of which is rooted in misconception and, dare we say it, downright ignorance.

So, to set the record straight about the most commonly held fuel injection misconceptions, we picked the brains of several of the country’s leading engine tuners and race team technicians, and captured their collective feedback… It’s very difficult to improve on the standard mapping that production dirt bikes come with.
FACT: Not necessarily true. Because enduro models are built for several markets around the world – where fuel quality differs markedly – the air/fuel ratio used in standard maps tends to be on the rich side. If you look at the muffler internals of many standard bikes, they’re invariably covered in black soot after a few hours’ run-time. And while that is partially the result of the residue from unleaded fuels, it can also indicate a rich air/fuel mixture. The ‘benefit’ of a rich standard map is that fitting a less restricted aftermarket muffler instantly generates good performance gains, as it’ll automatically lean the air/fuel ratio off. Even bigger gains can then be achieved by mapping changes to specifically suit the new exhaust. As fuel-injected motocross models tend to all be run on higher-octane fuel to suit their engines’ higher compression ratios, the mapping in production motocross machines tends to be closer to the optimal mark.

Fuel-injected bikes only come with one map installed in their ECU.
FACT: Well, that depends on the bike. But for a greater majority of machines, there is actually more than one map installed on the bike’s ECU. It’s simply a matter of how the other maps are accessed. The EFI-equipped KTM/Husberg/Husqvarna models, for instance, come with three maps: a standard map and one either side of it – a ‘Soft’ and an ‘Aggressive’ map, if you like. Note that these maps have different ignition settings, but only subtle changes to their fuel settings (significant changes to fuel settings can only be made with the User Setting Tool). In broad terms, the Soft map retards the ignition by about 2º while the Aggressive map advances it 2º. Honda’s 2015 250 and 450cc MXers are fitted with a bar-mounted Engine Mode Select Button (EMSB), which gives you three different EFI/ignition maps to choose from. An HRC accessory tuning tool can then be used to re-program the customised maps that are actuated by the EMSB. The new-gen MX models from Suzuki and Kawasaki use plug-in EFI couplers to access the ECU’s soft/aggressive (rich/lean) maps.

You can’t change maps on the fly.
FACT: Partially correct. For KTM/Husberg/Husqvarna models, you can technically change maps on the fly, but the map won’t ‘engage’ until you kill the motor and start it again (or let it idle for 5-10 seconds). When the bike starts again, the ECU senses a different resistance, which routes it through the relevant ignition curve. Similarly, the maps accessed by Honda’s new EMSB can’t be changed on-the-fly – the engine needs to be idling in Neutral before the button will work. The bar-mounted dual-map switch on Sherco’s two- and four-strokes, on the other hand, does offer genuine on-the-fly map changes. 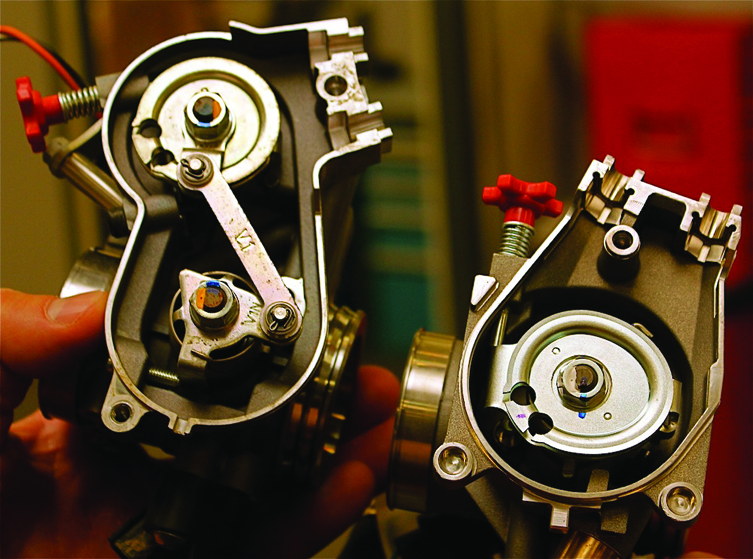 You need expensive tuning tools and/or software to access alternate ECU maps.
FACT: Not entirely true. To access the alternate maps on any fuel-injected KTM/Husaberg/Husqvarna, you will need to buy a $170 Map Selector Switch – a small dial that sits in your airbox and is connected to an aftermarket bar-mounted dual switch (Husky’s 2014 and 2015 MX models come with this switch standard). But you can’t toggle between the three maps. The bar-mounted switch only gives you OTF access to two maps – the standard one plus whichever map your choose on the dial – Soft or Aggressive. Aftermarket company, Trail Tech, does actually make a switch that allows you to toggle between all three maps – “Standard”, “Mild” and “Wild”.

Tuning tools are easy to use to alter your bike’s mapping.
FACT: That depends. If you’ve had plenty of experience with tuning carburettors, that knowledge is likely to transfer to EFI mapping pretty quickly. But for the average punter without much mechanical know-how, the manufacturers’ tuning tools can be both expensive and bamboozling. As Fuel Torque’s Rex Fleiter puts it, “Many people are too scared to wind their suspension settings more than a few clicks, and even more adverse to adjusting their ECU’s ignition and fuel settings. In fact, most owners are shit-scared that they’ll blow their bike up if they to advance their ignition or lean their fuel settings off more than one tiny increment!”

Yamaha’s mapping tool (GYTR Power Tuner) is probably the cheapest and easiest to use, but the downside is that its tuning increments are pretty coarse. On the other end of the spectrum, the User Setting Tool for KTMs and Husqvarnas (which are only available through KTM dealers in Australia) allows for much finer adjustments to the parameters, but it’s also more complex. And at $1200, it’s not cheap. Note also that, when you do use the User Setting Tool to alter the bike’s standard map, the Map Selector Switch will then toggle between a soft and aggressive version of this new ‘standard’ map. Dyno development is the most effective way to modify standard maps and maximise performance.
FACT: For road bikes (where wheelspin is not a significant factor), that may be the case. But for dirt bikes, dynos are rarely regarded as the most reliable tuning instrument. Sure, they’re used extensively by the manufacturers to develop the bike’s standing mapping, and many tuners will use a dyno to quantify gains and/or shifts in power delivery. But, according to a greater majority of tuners and Pro riders, real-world trial and error seems to deliver maps that work best on the trail and track. Most tuners report that, whether they’re modifying maps for MX/SX, desert, enduro or average trail bikes, seat-of-the-pants feedback from experienced riders will invariably produce much better results.

The only parameters you can vary in your bike’s ECU are ignition timing and fuel volume.
FACT: Not so. KTM’s mapping software, for example, allows you to alter another parameter called “Acceleration Correction” – which can be adjusted across four different rev ranges. This helps give the engine an extra burst of fuel (somewhat like the effect of a carb’s accelerator pump) when the bike is under load. And according to most tuners, the Acceleration Correction settings play a significant role in generating performance gains. In the French-made Synerject EFI system – now used on Sherco’s and Beta’s smaller-capacity four-stroke enduro models – you also have the capacity to electronically alter the bike’s level of engine braking. This is achieved by a stepper-motor that holds the throttle body’s butterfly partially open, even when the throttle is closed. Aftermarket technology, such as the GET ECUs, also allow additional parameters to be altered – such as a gear-cut sensor, the instalment of a second injector and data-logging capabilities. GET is also the only company to offer a GPA (GET Power Assist) function – which allows the rider to dial in varying degrees of traction control on the fly – and the ability to use your smartphone to alter ignition, fuel and rev limiter parameters via WiFi.

Your engine warranty will be voided if you change the ECU’s standard map or fit an aftermarket ECU.
FACT: In most instances, this is strictly true. Sure, by the same rationale, you could argue that altering a bike’s jetting should also void its warranty. You might also argue that manufacturers build ECUs to only allow ‘safe’ changes to their parameters. But it’s important you ask your dealer for clarification before making any changes to your engine’s mapping. For example, KTM and Husqvarna’s policy says that, if you’ve plugged a User Setting Tool in to your bike (which their diagnostic software will confirm), then you’ll forfeit your engine warranty. That might sound harsh, but remember that a bike’s warranty is already limited – in terms of timeframe and several other conditions.

All dirt bike fuel injection systems automatically adjust for any and all changes to fuel and air supply.
FACT: Incorrect. Dirt bike EFI systems are not ‘closed-loop’ systems. With no Lambda probe/sensor in their exhaust, these systems are not capable of fully picking up on the fact that an almost-blocked air filter is making the engine run rich (through an air pressure sensor in the throttle body will help the EFI adjust to some extent). Similarly, the EFI will not know if a partially blocked inline fuel filter is making the bike run lean. These are problems that you, the owner, will need to be sensitive to. As your bike’s ECU calculates the parameters 100 times per second, there’s no need to let the engine idle for 30 seconds so the EFI system can recalibrate itself to the new ‘environment’.
FACT: Incorrect. Because dirt bikes do not use sophisticated closed-loop fuel injection systems, best practice is to let the bike get up to operating temperature at idle, and then switch it off before re-starting the machine. That gives the EFI time to ‘familiarise’ itself with its new surroundings (temperature, humidity, altitude, etc) and/or any changes you’ve made to the engine or exhaust since it was last started. Doing this will ensure your EFI system works optimally, particularly for starting.

By delivering optimal air/fuel ratios at all throttle settings and RPMs, EFI systems make an engine more fuel-efficient.
FACT: In theory, that’s correct – because EFI systems are designed to meter air and fuel at a perfect 14:1 ratio across the entire rev range. But empirical evidence suggests that fuel-injected bikes are no more fuel-efficient (than their carb-fed counterparts with the same engine capacity), and sometimes thirstier. This is due to the fact that, in general, EFI engines generate more horsepower, and added horsepower requires more fuel. So, while an engine may produce fewer emissions when fitted with EFI, its fuel range (given the same fuel tank capacity) might not necessarily improve. Aftermarket throttle bodies have not yet been made for dirt bikes.
FACT: Incorrect. In the past five years, companies such R&D, Injectioneering and SSB (Simon Smart Body) have developed either aftermarket throttle bodies (some with a slide rather than a butterfly) and/or modifications to existing throttle bodies, and managed to generate a significant boost in power and throttle response during track testing. But they’re yet to be widely embraced as cost-effective performance mods, nor have any manufacturers incorporated them into their production models. Stay tuned, though; this is likely to change in the coming years. After all, the butterfly system still used in a majority of throttle bodies is pretty damn old-school.

The 2000-model Cannondale was actually the first production dirt bike with EFI, but the American-made E440’s existence was very short-lived. Gas Gas then took the world by storm when its 2002 FSE400 arrived with a lightweight Magneti Marelli fuel injection system. While road bikes had been fuel-injected for years, the off-road world was suddenly coming to terms with a fuelling system that could adjust itself for changes
in altitude, humidity, etc. The downside for the early EFI systems was consumer perceptions of complexity and an aversion to re-mapping bikes with computer software.

Sherco, Husqvarna and Aprilia all introduced EFI on their four-stroke enduro bikes between 2004 and 2008. Husaberg and BMW dumped their carbs in favour of EFI in ’09. And KTM fitted fuel injection to their MX and enduro bikes in 2011 and ’12. In the motocross paddock, Suzuki, Honda and Kawasaki all introduced EFI to their ’08 or ’09 MXers, while Yamaha finally injected their 450cc and 250cc MX models in their own good time – in 2010 and 2014, respectively. TWO-STROKE FUEL INJECTION: HOW IT WORKS